Posted on September 26, 2019 by Julie Haiselden

I reviewed this novel as part of the team at  WHISPERINGSTORIES 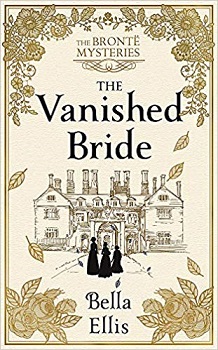 The Vanished Bride
The Brontë Mysteries

I received a free copy of this book.

A young woman has gone missing from her home, Chester Grange, leaving no trace, save a large pool of blood in her bedroom and a slew of dark rumours about her marriage. A few miles away across the moors, the daughters of a humble parson, Charlotte, Emily, and Anne Brontë are horrified, yet intrigued.

Desperate to find out more, the sisters visit Chester Grange, where they notice several unsettling details about the crime scene: not least the absence of an investigation. Together, the young women realise that their resourcefulness, energy and boundless imaginations could help solve the mystery – and that if they don’t attempt to find out what happened to Elizabeth Chester, no one else will.

The path to the truth is not an easy one, especially in a society which believes a woman’s place to be in the home, not wandering the countryside looking for clues. But nothing will stop the sisters from discovering what happened to the vanished bride, even as they find their own lives are in great peril…

‘The Vanished Bride’ is an historical novel by Bella Ellis. Ellis has taken the Brontës, before the sisters became famous authors and dropped them in a sinister Victorian tale. The book is written in the third person and each chapter is seen through the eyes of one of the main characters.

We join Charlotte in the parsonage in Haworth in December 1851 when she is in reflective mood. She thinks back to a time in 1845 when circumstances led to her having three of her precious siblings living with her. They received word that Elizabeth Chester, a young wife and mother, from a neighbouring village has disappeared under mysterious circumstances and undertake to find out what happened to her. They visit Elizabeth’s home, Chester Grange, under the pretext of concern for their friend, Mattie, who was employed as governess to the Chester children. Was this a crime scene or had Elizabeth disappeared of her own volition? This seemed unlikely owing to the amount of blood on the floor. Had she been murdered and spirited away? These are the questions the sisters, peripherally assisted by their brother, Branwell, set about trying to answer.

We can envisage the bleak isolated house set on the moors and it is fair to say the author has had help here, because most of us have read or watched something about the family so we know what to expect of the Brontë home. However, Bella Ellis is more than equal to the task of putting literary devices to good use. She illuminates her tale with metaphors, similes and personification along with occasional bit of gentle humour.

I enjoyed their delicate probing of the community of Arunton as they sought clues to help uncover the truth. The more they find out, the more complex the puzzle becomes but gradually we’re drip-fed snippets of information to help unpick the mystery.

We see each of the sisters through the author’s interpretation of their mind sets and I suspect she has undertaken a significant amount of background research into the personalities of each on which to base her characterisations. She even has the sibling bickering occasionally, as the romantic Charlotte clashes with the head-strong Emily and gives Anne the part of the pragmatic peacemaker.

Throughout the book, Ellis gives the forward-thinking sisters a social conscience as they demonstrate their frustration with the lack of status of women in society. As their confidence increases, they realise that fulfilment can be achieved through channels other than marriage.

Bella Ellis is clearly a huge Brontë devotee which is apparent from her choice of pseudonym and the subtle nods to the sisters’ subsequent work running through threads in this tale.

Would the sisters be impressed with being plunged into a dark tale of mystery and intrigue? As it is a well-written book with great attention to period detail, I suspect they would. The pace might be a little slow for those who enjoy action-packed drama but for fans of the sisters’ work, this story definitely captures the essence of the Brontë style.

This is a delightful whodunit which will appeal to many readers who enjoy a cosy conundrum. I thoroughly recommend this book and award five stars.