I recently reviewed this intriguing book as part of the team at WHISPERINGSTORIES. 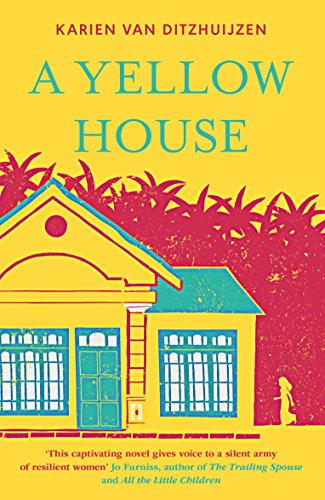 Ten-year-old Singaporean Maya is lonely: her grandmother is dead, her mother is focused on her career and her best friend has become a bully. When Aunty M, a domestic worker from Indonesia, joins the family to take care of Maya and her baby sister, Maya is ready to hate her.

Aunty M smiles a lot, but says little. However, after Aunty M rescues a fellow maid living in the same building and beaten by her employer, Maya discovers a side of Singapore hitherto unknown to her. She and Aunty M grow closer as they meet more and more women in need. What will happen when Mama finds out about Maya and Aunty M s growing involvement with the aunties?

Will Maya lose Aunty M too? After all, Mama did say she hates busybodies … This poignant coming-of-age story, told in the voice of inquisitive Maya, explores the plight of migrant domestic workers in Singapore and the relationships they form with the families they work for.

‘A Yellow House’ is the debut novel from Singapore-based author, Karien Van Ditzhuijzen. We see events through the eyes of Maya, a ten year old girl of mixed heritage, living in modern day Singapore with her parents, younger sister and the family’s live-in domestic helper.

We learn something of their cuisine and lifestyle; Singapore is a small island with a large population which necessitates the majority of citizens living in apartment blocks with adjoining concrete play areas where children meet up and their carers or ‘aunties’ gather to gossip.

Maya is clearly still grieving the loss of her grandmother who had previously taken care of her. She is therefore extremely hostile to Merpati, the new Indonesian domestic worker whom her parents employ, to coincide with her mother returning to work.

Maya is determined to hate Merpati but little by little she is drawn into her world. She quickly finds out there is a micro-community of underprivileged workers living in the apartment blocks, some of whom are treated little better than slaves by their employers. Merpati, or ‘Aunty M’ as she becomes known, seems extremely quiet and subservient but Maya finds their domestic worker has more depth to her character than she could possibly imagine.

This is a novel of parallels. We witness how alone and excluded Maya feels when she is bullied by her cohort. We see her shame and humiliation when she tries desperately to fit in, yet she doesn’t see that her initial rejection of Aunty M is equally unkind. Many migrant workers hate their jobs because of their employers’ unacceptable behaviour. Though a successful career woman, Maya’s mother also hates her job for the same reason. The big different is that Maya’s mother has the option to resign. Aunty M’s friends have no such luxury because they are virtually bonded to the families they serve, with some risking life and limb to escape.

When I read the synopsis of this novel, I wasn’t at all sure it was something with which I would engage but my initial scepticism soon gave way to intrigue. This is a thought-provoking, eye-opening read which will shock some people but will hopefully be a vehicle for more awareness of the lives of the vulnerable and voiceless. Writing as an adult from the perspective of a child isn’t easy but the author has managed to capture the personality of Maya very well.

We see Maya re-evaluate her attitude as she transfers her energy from self-centred woes to caring about those less fortunate than herself. She grows in confidence as she makes a friend in Cat, a new student at her school and we also witness the changing dynamic between Maya and her family.

This multi-layered story is rich in symbolism and altruism as it lays bare many of life’s inequalities. I’m not sure either the synopsis or the cover design do this book any great favours but if readers stick with it, they’ll be rewarded by discovering the significance of the title and learning something of a culture with which they may be unfamiliar. I award ‘A Yellow House’ four stars.

Growing up as an expat child in Asia with migrant domestic workers in the house, Karien never asked herself why these women left their own children behind, and crossed a sea to look after her. That question arose later, and in 2012 Karien joined HOME, a charity that supports migrant workers in Singapore.

In the following years she worked closely with domestic workers, and listened to their stories that were the inspiration for A Yellow House.